The story behind the shot:

For some time now I’ve enjoyed photographing at Pen Ponds in Richmond Park (see location map at the end of this post). It’s usually quiet around sunrise and weather conditions can be great in September.

The overnight weather forecast predicted clear skies and I knew from experience that this location might have some mist, so I decided to head out early the following morning.

I had to cycle into Richmond Park, about a 2 mile ride from home, as sunrise would happen before the road gates opened for traffic. The park was wonderfully quiet, deserted even. Once inside the park, I didn’t see a single person on the way to my planned location. There was a wonderful pre-dawn orange glow along the horizon and plenty of early mist. I saw so many photo opportunities on the way that were hard to resist, but I had this place in mind when I set off, so I kept going.

I arrived at the ponds around 06:10, which was about 30 minutes before sunrise, and the scene before me was superb, with gorgeous colours in the sky and a light mist over the water in the distance. On top of this, a lone swan was gliding serenely towards my position. I was frantically setting up the camera on my tripod, rushing so much I was forgetting to check the settings. I fired off an initial exposure as quickly as I could. As a result, this was the pitiful first image I captured: 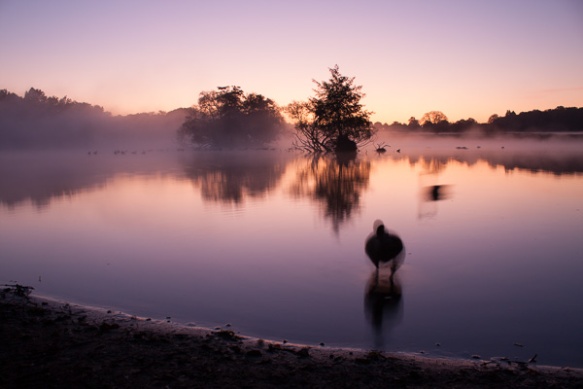 With the camera on my default setting of aperture priority at f/8 and ISO 100, it had selected a shutter speed of 2 seconds and I hadn’t even noticed!  Panic was setting in. The motion blur was a schoolboy error, made in the excitement of the moment, and the sky was also far too bright to reveal the true colours.

Hurriedly, trying hard to ignore the goose coming out of the water at my feet and before the swan had time to move too far into the dark reflection of the tree, I adjusted the exposure compensation to -2EV, bringing the shutter speed down to 1/2 a second and fired off another shot with fingers crossed. Luckily, the swan decided to stop in just the right spot and remain practically motionless, giving me this: 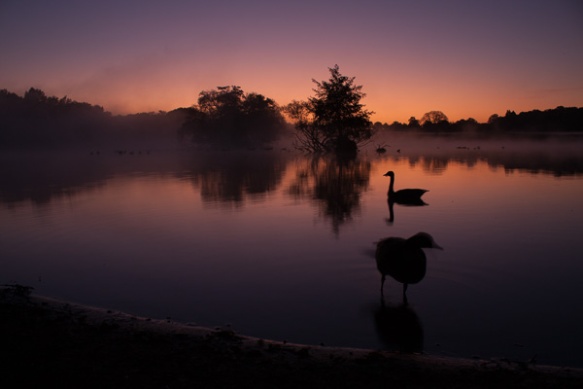 At first glance not a fantastic image, being far too dark in some areas, but by cropping out the bottom third later when I was home I managed to remove the goose that had waddled up to me (probably expecting food but getting none). A bit of minor post processing, adjusting levels and white balance gave me the result I was after (main image above).

In hindsight, increasing the ISO  to 200 or using a slightly wider aperture would have helped to give a faster shutter speed, but by the time I thought to try those options the swan had moved into a position where it’s outline would have been lost against dark reflections.

It came back about 10 minutes later and I was able to get a second shot that I was happy with:

Followed by this shot just another minute later:

So an enjoyable morning and all within a half hour’s bike ride from home!