Over the past few years, I’ve photographed the deer in Richmond Park on many occasions, so I thought I’d write some articles that may provide useful information to other photographers who might be interested.

Richmond Park has up to 650 red and fallow deer, with the males known as stags and bucks respectively, the females hinds and does and the young calves and fawns. Even with so many around, I have been known to walk for two to three miles and not see any. Sometimes it’s just not your day!

Within the context of deer photography in Richmond Park, “stealth” refers to methods used to get near enough to the deer in order to capture close-in shots without disturbing or “spooking” them. It does not necessarily entail keeping yourself hidden from the deer but has more to do with making the deer realise you are not a threat, being “stealthy” while remaining in plain sight.

At all times, the welfare of the deer should be your main concern, with your own safety, and that of anyone around you, coming a close second. Remember, it may be a public park but it is us who are encroaching into their environment, not the reverse, so we should be respectful of the deer at all times.

First of all, let’s talk about clothing and related items. I’ve seen many articles discussing the need for “drab” colours, camouflage jackets (and lens covers) etc. I’ve even heard some people mention that you shouldn’t wear after shave/perfume and to stay upwind so they can’t detect your smell! These methods may well prove useful when stalking highly elusive deer in the Scottish Highlands or somewhere similar, but the deer in Richmond Park have become habituated to the presence of people and are quite relaxed with cyclists in garish lycra and joggers in bright tops being in close proximity. And don’t even think about crawling through the undergrowth in “SAS” mode, trying to sneak ever closer – you’re far more likely to scare them off doing this than if you remain visible and are obviously not a threat.

To that end, the first tip is to move slowly and quietly with no sudden movements. Be careful where you place your feet so your footsteps aren’t too noisy. Let them get used to your presence and take your time. This is a subject that shouldn’t be rushed.

When approaching, if you keep heading directly towards them, you will reach a distance from them where they consider you to be a threat, commonly referred to as the “circle of fear”. Rather than use a direct line, instead use a zig-zag route, going from side to side so it appears that you are passing away from them, but turning after say 10 metres and very gradually moving closer.

Watch their behaviour. As they notice you, their heads will pop up and swing around, watching to see if you are a threat. At this point, move even slower, staying still now and again until they lose interest in you. If they start to move away, or any that are lying down stand up, you’re getting too close for them to feel comfortable so you should crouch or kneel down and wait.

If you’re in close and need to move, don’t stand up suddenly or you will spook them. Shuffle on your knees if you need to. Remember to move slowly. If you’ve put down a rucksack, don’t suddenly swing it onto your back. If using a tripod, adjust it slowly and quietly.

If you’ve selected a “target” deer within a group for some reason and still need to get close, keep an eye on the other deer close by. If one gets up or moves away, this will cause a chain reaction affecting others. So as soon as one gets jittery, stop, crouch down and wait. They will eventually realise you’re not really a threat and accept your presence.

The time of year plays a part as well. During spring and summer, the stags and bucks will mostly be concerned with eating, as they need to gain size and strength for the rut later in the year and the winter that follows. They can be more relaxed, moving slowly in groups to conserve energy while grazing and not too bothered by people nearby. The hinds and does may have young at this time, so will be protective. Be especially cautious when moving through long grass or ferns. Look out for “deer nursery” signs that are placed on trees by the park staff and be wary and respectful.

Young calves and fawns are usually more skittish than the adults, especially in larger numbers as this seems to make them more nervous. If you find just two or three, they will still be very wary of you but less prone to run away suddenly.

If you find a group keeps moving away, then by getting closer you end up driving them onwards. In this situation, I usually leave them and move off in search of others, mostly because I try my best not to stress them. You might try to circle ahead of them and wait, especially if you’re in an area with great lighting and don’t want to miss the opportunity.

During the autumn rut, you need to be more careful about your own safety. If you’re out early before sunrise and possibly in mist, listen out for stags bellowing to gauge their location. Battling stags can be unpredictable, with the loser being chased away at speed possibly in your direction! Stags with harems will try to coral escaping hinds and chase off competing stags. So be more cautious at this time, as their behaviour will be more erratic.

Before spending time slowly getting closer, check first for other people who might be approaching, especially those walking dogs (deer fear dogs). There’s no point wasting time being stealthy if the deer are going to move away before you get your shot! Having said that, other people can be useful at times as they cause deer to look up giving you a more engaging composition than the “heads down eating the grass” shot. 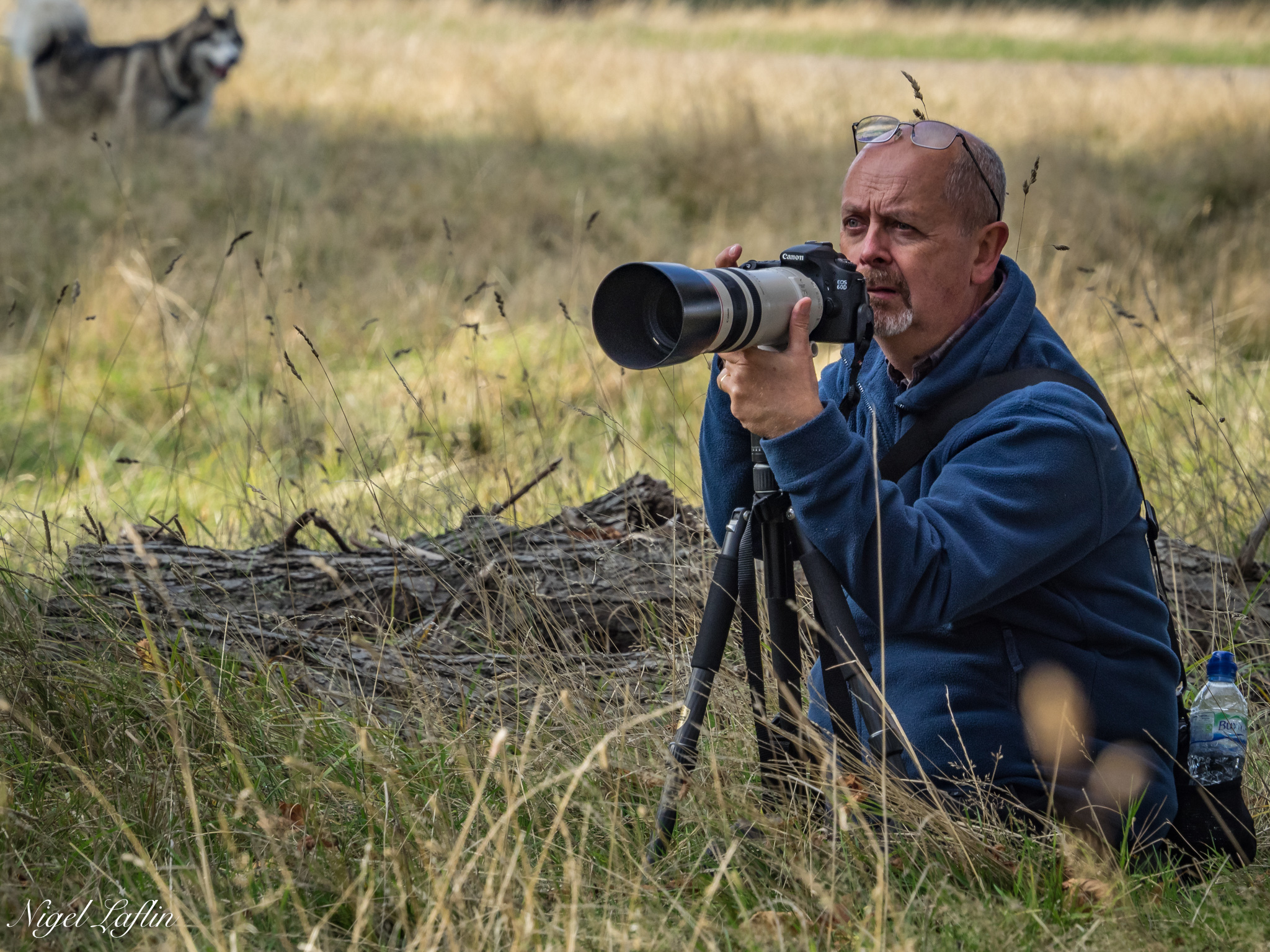 If you see other photographers in the area, try to be respectful by keeping out of their shot and not spooking any deer they are photographing. If I see too many photographers, which is quite common on an autumn weekend, I often move away to try to find somewhere less “busy”.

Talking of other photographers, just because you see someone else getting close to deer doesn’t mean it is safe to do so – not everyone knows what they are doing. I’ve seen some get closer and closer (not going slowly either) until a stag has turned and charged them! Remember, it’s your safety at risk, so always choose caution.

This is a genre of photography that is most easily accomplished on your own when you don’t have to think about someone else’s behaviour or their position & movement. Fair enough if you prefer to be with a friend, but a large group can become difficult. The only tip I will give you for a group is not to surround them, for then you are acting like a predator (think wolves) and they will be more nervous. You will also end up in the background of someone else’s photo! If threatened, the deer could run in any direction putting people surrounding them at greater risk.

Click any image above to view in a gallery

Some of these techniques may be useful in other locations with truly wild deer that are not habituated to human presence, but getting close will be much more difficult with most deer running off almost as soon as they hear you.

Remember – there will be a learning curve so there’s no need to rush. Spend plenty of time practising your techniques, don’t expect to head out on day one as a “stealth master”. If you make mistakes, learn from them! It won’t always work out as you expect and you won’t always get the shot you want. Here’s just one example story from my own experience.

I had been photographing a young stag that was lying down in long grass along with others in a small group. I wanted a close-in head shot of ears and antlers poking up through the grass stems but I didn’t have a long telephoto zoom lens with me, just my standard 18-135mm, so I needed to get closer. Some other photographers had noticed me and politely moved over to the other side of the group, allowing me the freedom to edge in. So there I was, sitting in the grass with the camera on a tripod in front of me, slowly moving the tripod and then shuffling forward a few inches at a time. After five minutes I was almost close enough when another photographer out walking with his girlfriend diverted from his path and headed straight towards “my” deer. With the camera held out in front of him, using the rear screen to compose, he marched forward clicking away until the deer stood up and moved away. Checking his shots on the screen, he happily walked off without a word!

You can read a similar story at the end of this article.

Finally, I should mention that ticks are very prevalent in Richmond Park. I had two on me last year and three in the last couple of weeks and we’re only in May. If like me you prefer shorts in summer and are in the habit of kneeling or sitting in the grass to achieve a low-angled shot, then you will be very prone to acquiring them! Check the Royal Parks and Government Health websites for some useful information on avoiding and dealing with ticks.

I’ll be adding to this series later with other articles on shooting techniques and composition.