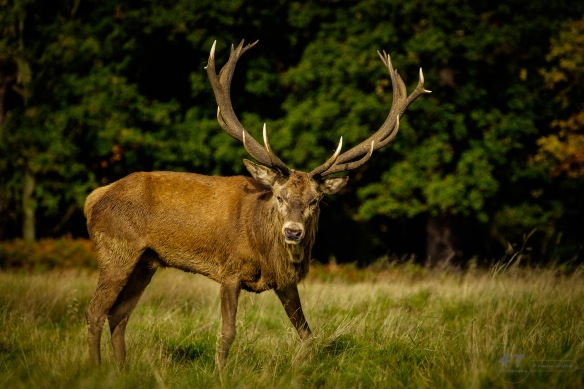 A couple of us were enjoying photographing some red deer towards the end of a photo walk in Richmond Park when I took the image above.

We’d had dull conditions to start, no sign of the sun at sunrise, quite windy and a heavy downpour during which we had to shelter under the trees, but the sun appeared eventually giving us some better light. There had been a lot of deer activity with this being the Autumn rut – plenty of bellowing and running back and to, with the larger stags fending off the younger males who were trying marauding tactics, running into the group of hinds to try and split them up and take a few away, some with success but mostly not. The odd hind slipped away by themselves, tempted by the bellowing and strutting of another male nearby, who would quickly run over to round her up.

So it was relaxing later on to be sitting near a small group of hinds lying down, with one stag occasionally walking through his harem, bellowing and sniffing the air to see if they had come into season. Other males nearby were also lying down, taking a breather from all the action and generally chilling out, providing a calmer scene to work with. This gave us plenty of time to take up a position, compose a shot, adjust focusing and exposure settings without having to deal with the deer running around and being ever alert for safety concerns.

After a few minutes though, a second group of hinds with a large stag came out from the tree line behind, heading in the direction of the first group. On seeing this, the first stag simply stood up and walked away without even a bellow. To me, they looked evenly matched in size and I would have expected at least some bellowing and parallel walking to size up the opposition before giving up such a prize. Maybe they had come to blows before and he knew how it would end!

The second stag, now in charge of a larger group of hinds, would not tolerate the other males around, even though they weren’t actively trying to steal his females. He kept chasing them away, scent marking the ground with urine, pawing it into the ground and scraping with his impressive antlers. It was at this point when he was heading back to his hinds that some young males had wandered behind me and I ended up between them – something you are warned to avoid by signs placed around the park, and something I actively do try to avoid but in this case had not noticed the movement.

I grabbed a couple of shots as he was staring at them but felt like he was glaring directly at me and deciding whether I warranted his attention. I didn’t wait to find out, thinking it more prudent to move out of the way first. But the encounter did give me an interesting image and I love the stance of the stag and the eye contact.

Here’s a few more images I took on that day mixed with some from another walk two days previously: 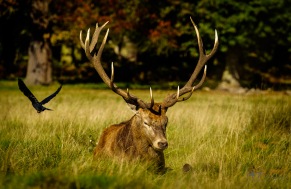 If you’re interested, you’ll find more images from both walks by clicking here and here. Thank you to those that came on the walks, I really enjoyed your company and I hope to see you all again soon.

Click here for current deals on electronics at Amazon.co.uk

Disclaimer: This post contains Amazon affiliate links. This means I might receive a small commission if you purchase from Amazon after clicking these links. This does not involve any extra cost to you. I use these links to help offset the cost of running my website.