This stag has recently lost one of his antlers, the other will also drop off soon. With red deer, this happens naturally around the end of winter and they take until July to regrow.

Snow is scarce in southern Britain. Checking through my archives, it’s been around eight years since I captured images in a decent snowfall. So I was excited when the “Beast from the East” (a Siberian weather system heading our way) was forecast to bring us unusually heavy snow.

However, while much of Britain was knee deep in the stuff and travel systems were being crippled, around my area we were hardly getting more than an inch.

I take photos of deer in all seasons, most notably the rut in autumn but I really wanted some decent shots of deer in snow to add to my portfolio, so I headed into Richmond Park four times over five days.

It was frustrating at first – either too little snow on the ground or no snow falling, and if a flurry did blow through it only lasted a few minutes. It was difficult to be in the right place at the right time AND find the deer!

Luckily, on the last day of the extended chill, it all came together. A heavy fall of snow started just as I found some deer and was sustained for well over an hour. I managed some nice shots, including some of deer that had shed their antlers which occurs naturally towards the end of winter. They will regrow by the summer.

Here is a selection of images taken across my four visits: 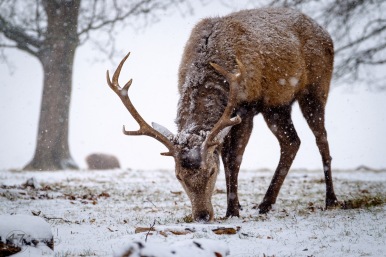 A red deer stag grazing on grass it can find beneath the snow.

This stag has recently lost one of his antlers, the other will also drop off soon. With red deer, this happens naturally around the end of winter and they regrow though spring until July.

A red deer stag lying in bracken covered in snow.

This stag has recently lost his antlers and the raw pedicle is still visible. With red deer, this happens naturally around the end of winter and they regrow though spring until July. 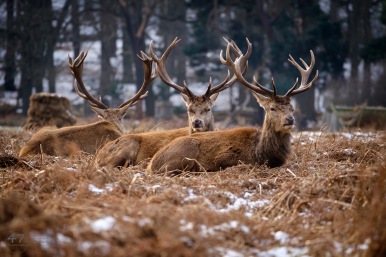 Did anyone else make it out into the snow to photograph deer? I’d love to see some examples!

Click here for current deals on electronics at Amazon.co.uk

Disclaimer: This post contains Amazon affiliate links. This means I might receive a small commission if you purchase from Amazon after clicking these links. This does not involve any extra cost to you. I use these links to help offset the cost of running my website.